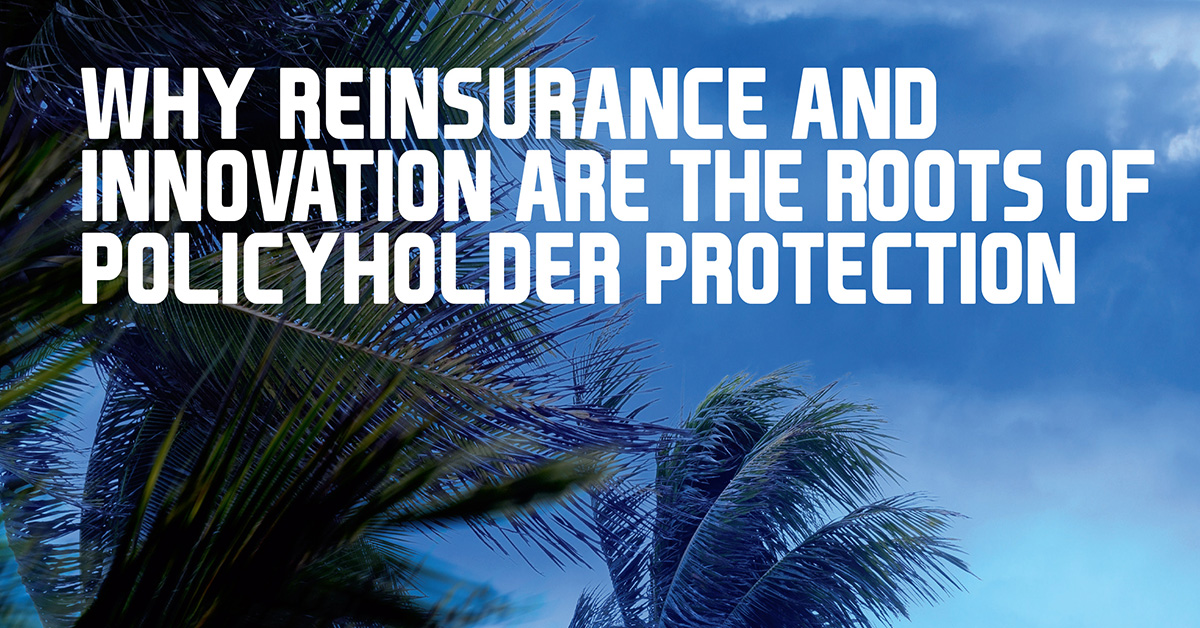 WHY REINSURANCE AND INNOVATION ARE THE ROOTS OF POLICYHOLDER PROTECTION
By David Howard, Kate Friday and Kyle Menendez

This article was originally published by The Rough Notes Company, Inc. in the June 2021 Issue of Rough Notes Magazine/Florida Special Report and is republished with permission from the publication.

Thomas Carlyle, the 19th century Scottish historian and essayist, is famous for declaring “no pressure, no diamonds,” meaning we rarely experience great success without a little bit of despair. As we collectively think about the sources of discomfort that the property insurance/rein­surance industry has felt over the past five years, we have experienced a series of pressure points that have challenged carrier resiliency and forced many to adapt to changing social, economic and atmospheric conditions.

As continuously seen in history, it is those who innovate and evolve that go on to become pillars of strength in their respective industries.

The past five years have brought forth a series of immense challenges within the property insurance/reinsurance market (statistics provided by TigerRisk, a risk, capital and strategic advisor to the global insurance and reinsurance industries):

The series of natural catastrophe challenges, coupled with uncertainty in the financial markets, which put strain on many insurance and reinsurance carriers’ invested assets, have caused numerous providers to reevaluate their own views of risk and, in the face of increasing costs, begin to wonder if innovation is once again the tool to lean on.

Luckily, the historians among us don’t have too far to look for good news. The reinsurance industry has proved resilient in the face of pressure in the past. For example, in 1992, Hurricane Andrew made landfall in Florida as a Category 5 hurricane. After devastating Southern Florida, it proceeded to churn across the Gulf of Mexico and make landfall again in Louisiana as a Category 3 hurricane. In its wake, the industry found itself questioning whether the tools and resources in place were sufficient enough to face a new and evolving view of catastrophic weather risk. Thus, a year later in 1993, came RenaissanceRe, which introduced improved analytics and probabilistic catastrophe models. Today, RenaissanceRe is one of the largest property catastrophe reinsurers in the world.

Despite the challenges of 2020, capital that has flowed into the reinsurance industry is meaningful; and similar to what RenaissanceRe was able to achieve and consistent with Carlyle’s principle of “no pressure, no diamonds,” the reinsurance space continuously evolves.

Innovators are adapting their views of risk and, more important, their product offerings to increase the value offered to end consumers, our insureds. Carriers want to be viewed as a sustainable, multi-state insurance source for insureds. Thus, providers continually search for ways to refine underwriting and risk management craft with a laser-focus on delivering value and innovation through product offerings. With this, it’s critical for carriers to recognize that property owners have myriad choices regarding coverage options, and as the reinsurance community has provided for carriers, carriers must look to provide to insureds.

Reinsurance as the ultimate protection

So, what comes next in the 2021 insurance marketplace?

Carriers throughout the Southeast have begun to reevaluate their entire portfolios and, ultimately, their risk appetite on a home-by-home basis. So, what does this mean in action? The process varies by carrier but includes a keen focus on research and development initiatives, some of which include the development of what is coined as the Ideal Risk Profile. The goal of creating an Ideal Risk Profile is to harden, mitigate, or reduce a portfolio of insured homes against loss from the ever-increasing catastrophic weather trends of the last five years. Understanding the ultimate return on investment is to reduce total costs incurred, including inspections to reinsurance, legal defense and more, to insure a home and pay out claims. If this activity is done right, the results will enable carriers to identify what its ideal risk homes look like, and in turn begin prospecting.

As mentioned, innovation is and will continue to play a key role in how carriers survive and adapt to the volatile weather cycles affecting the property insurance marketplace. However, reinsurance is just as critical.

In sum, reinsurance is the ultimate protection for a carrier and its policy-holder surplus. It’s also one of a carrier’s most significant expense components. Consequently, reinsurance comes at a hefty price in the Southeast. To get a sense of what this looks like, consider that about $0.30 of every premium dollar taken in is used to cover reinsurance costs. Simply put, carriers cannot exist without it.

As expected, innovation is also occurring in the reinsurance structures that carriers place on an annual basis. As an example, a carrier’s annual reinsurance placement is now filled with traditional reinsurance, collateralized reinsurance, insurance-linked securities, catastrophic reinsurance bonds, parametric insurance and other non-traditional forms of protection.

On the homeowners policy front, for many years we saw only minor changes to the traditional ISO homeowners policy form that most carriers issue on paper. However, current weather trends and other loss factors became the impetus for carriers to reassess coverages, territorial restrictions and deductible changes. Additionally, recent catastrophic weather events have led to innovation in policy design and coverage, which is an absolute must for carriers in the Southeast to continue to write.

As carriers look to co-participate or retain more loss, they also look for insureds to participate in protecting, for the most part, their largest asset, the home. An insured’s co-participation, their minimum deductible, is trending in the form of higher deductibles in wind and all other perils. To mitigate billions in roof losses, carriers are making changes in roof coverage from replacement cost to actual cash value based on roof materials.

In essence, the homeowners policy is going back to its roots of protecting the insured against catastrophic and devastating loss from fire, damaging wind and hail, instead of acting as a home warranty or maintenance product. However, in this same regard, in order to serve as a home protection policy, many carriers will need to be more selective in insuring homes that fit their Ideal Risk Profile. An ideal risk, or home, tends to model better from a reinsurance perspective, and thus has a lower cost, due to its risk attributes, which in turn has a lower projected annual average loss.

To encourage the quoting and binding of ideal risks, carriers are rejigging their underwriting guidelines and promoting these changes to the agency force. Coupled with the promotion of these risks, carriers are hoping to provide substantial credits or discounted rates to insureds for homes that are protected against severe weather. Credits for newer homes, newer roofs, composition of roofs, hurricane mitigation devices, distance from water and water loss protection devices, like water sensors and water shut-off valves, are among the most prevalent credits available.

For primary carriers operating in regions with a high propensity for weather events like tornados, hail and hurricanes, reinsurers are the lifeline required to provide the necessary protection that carriers sell to homeowners. Thus, reinsurance serves as a key financial stability factor for independent agencies to watch. To write new business and retain current customers, understanding how carriers and reinsurers co-exist in the space allows agents to sell added protection, which equates to added security. This concept reigns true through added coverages, discounts and endorsements.

Since 1993, the evolution of reinsurance has played a pivotal role in positioning primary insurance as paramount to the homeowners insurance market’s continued viability and success. Future forward, if property reinsurance/insurance carriers want to continue to provide homeowners with a quality and financially secure product, innovation will be essential.

Kate Friday, Partner at TigerRisk Partners, joined the firm in 2010 as part of the analytics team and transitioned to the broking team in 2015. She has extensive experience in using catastrophe models, analyzing structure options and assisting clients in evaluating and selecting the optimal strategy.

Kyle Menendez, CPCU, ARe, AAI, an associate at TigerRisk Partners, joined the firm in 2017 on the current client team. He began his career in a market strategy and product development role at Chesapeake Employers’ Insurance Company, a regional casualty insurance carrier located in Maryland, in 2011.

A light you can trust

We proudly have earned an A, Exceptional Financial Stability Rating® from Demotech, Inc.

Copyright © 2023 Lighthouse Management, LLC. Website Terms of Use and Privacy Policy. Lighthouse Management, LLC is a licensed MGA representing Lighthouse Property Insurance Corporation, an admitted property and casualty insurance company authorized to write in Florida, Louisiana, South Carolina, North Carolina, and Texas. Insurance products are issued and underwritten by Lighthouse Property Insurance Corporation. Insurance coverage is subject to underwriting review and approval. Products may not be available in all states.